The purchase of my new tripod a couple of months ago has rekindled my interest in HDR. I’ve been trying to get some decent night shots of the Manhattan skyline [with pretty mixed results] for quite a while. Anyway, here is the best of the HDR results: 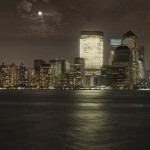 This is comprised of three images bracketed around a starting point of F5.6 and 8 second exposure. going +/- 1.33 stops. I’ve created the HDR image in Photomatix, and then used the resulting image as a layer mask against the middle of the three bracketed images. Finally I’ve restored most of the skyline, which was very grainy, and also the water, as it lost the smoothing from the long exposure. It’s ok, I think.

I’ve also had a hack with the new HDR offering from Nik Software, HDR Efex Pro. Here is a shot from a trip to Bath a couple of weeks back, with the HDR dial turn up to 11: 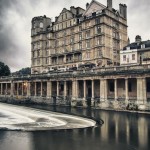 The starting point for the bracketing here was a F13 3.2 second exposure, with +/- 2 stops. This is using a preset called Grandma’s attic [I think; it takes a while to spin up on this machine]. I’ve finished it off with a bit of dodging and burning on the sky.

I like the results of this shot, despite the pretty classic over-sharpening halo around the building, and I quite like the package. Maybe it’s just me doing something wrong, but I often find that the alignment [using the default import / alignment setting] in Photmatix is a bit hazy. By comparison the Nik Software offering is tack sharp. There are some strange artefacts in this preset, which I think are visible in this small version of the image: there are a load of parallel horizontal lines across the sky. And it’s not just a feature of this preset: I’ve used it on other HDR shots from this weekend and it’s not there. It’s also pretty expensive for an [admittedly very good] one trick pony. I don’t know if I’ll take the plunge once the trial runs out…